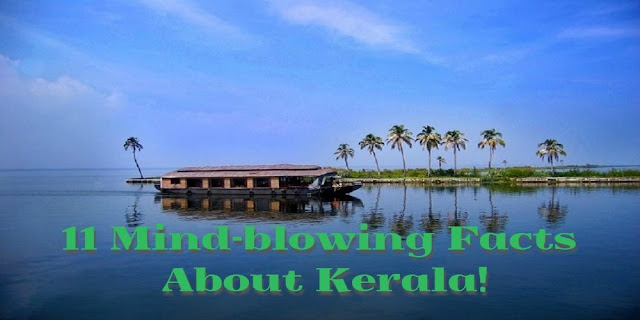 You should know these absolutely amazing and simply mind–blowing facts about Kerala before heading out to vacation in this fabulous South Indian state! Dubbed rightfully as God’s Own Country, Kerala is undoubtedly one of the most beautiful places to explore in the world. Offering attractions to suit the needs of all types of travelers, no one can take a complete tour of this fantastic state in just one trip.
If you haven’t visited this awesome place yet, you are missing out on exploring one of the most remarkable places in the world. Here are a few interesting and mind–blowing facts about Kerala to know before heading out for a trip.

It’s an epitome of natural beauty

Oodles of stunning natural beauty are among the top factors responsible for the thriving Kerala tourism. You will find picturesque beauty whichever corner of the state you head to. Destinations such as Munnar, Thekkady, Kochi, and Trivandrum are simply spectacular to visit. From sparkling beaches and nature parks to lush deep valleys and massive mountain peaks, you will find it all in Kerala!

The land of Ayurveda

This ancient and natural science of healing that has taken over the world by storm was birthed in Kerala. Ayurveda is an integral part of Kerala culture and tradition. It’s also responsible for a large portion of tourism in the state. There are scores of Ayurvedic spas, massage centers, and even hospitals across the state. In fact, the world’s first ever Ayurveda resort was opened here. Even those booking last minute flights for work trips to the state visit at least one or two such places.

Coconuts are vital to Kerala cuisine

Keralites love their food and the cuisine of the state is among the most famous ones across the country. But what makes the food here really unique is the addition of coconut to it. Used in all possible forms – oil, milk, and powder – coconut adds a distinct flavor to the dishes that make them stand out from the rest. Not just among the mind–blowing facts about Kerala, it’s also one of the most special things about Kerala cuisine.

Interesting Kerala trivia: Kerala is the first region in India to receive rainfall. This is one of the most interesting facts about Kerala and one that not many are aware of. When you see that monsoon has hit the state, you can expect it to head over to the rest of the country as well. Kerala is also among the states that receive the highest amount of rainfall every year. Thereby, you will see thriving crops, flower gardens, as well as tea and coffee plantations across the state. Isn’t this among the best mind–blowing facts about Kerala?

Kerala is home to stunning backwaters

Visit Alleppey, the Venice of the East and you’ll know what we mean. Kerala is home to a stunning network of scenic backwaters that make it one of the most romantic places to visit in India. One of the interesting facts about Kerala backwaters: A labyrinth of waterways approximately 900 km in length, it’s actually an incredible chain of lakes and brackish lagoons which lay virtually parallel to the state’s western coast.

Importance of Elephants in Kerala culture

One of the most mind–blowing facts about Kerala is that elephants are considered highly scared beings here. They have been an important part of the state culture and tradition since times immemorial. During festivals, weddings, and other festive occasions, you will see elephants neatly lined up and all decked up. Also, the state does more than its fair share when it comes to nature and wildlife conservation.

The state has the highest literacy rate

One of the most special things about Kerala is that it holds the record for being the state that has the highest ever literacy rate in the country. In fact, not only does it beat other states in this regard, it has achieved a hundred percent literacy rate! Kerala makes efforts to ensure that all of its residents are educated and well able to fend for themselves.

The first mosque of India was built here

Situated in Thrissur and dating as far back as the 7th century, the Cheraman Juma Mosque is known to be the oldest mosque in India. The mosque was built by a group of Arabs during the time of Prophet Mohammed in honor of their dead king – Cheraman Perumal. When you book business class flights for a trip to Thrissur, do include in your itinerary a visit to this heritage site.

This is among the most mind–blowing facts about Kerala. National Geographic has announced Kerala to be one of the ten paradises on earth. With scenic beauty, exotic wildlife, marvelous hill stations, breathtaking backwaters, vast plantations, mesmerizing paddy fields, and whatnot, who would disagree?

Houses the richest temple in India

Famed for being the richest temple in the country, Padmanabhaswamy Temple is located in Trivandrum, Kerala. Dedicated to Hindu deity Vishnu and finding mention in ancient Hindu texts, reportedly, the temple was built thousands of years ago. The estimated net worth of the temple – including gold, artifacts, antiques, and other valuable items – is said to be over US$100 billion.

Home to the largest living teak tree in the world

This is one of the most amazing and mind–blowing facts about Kerala especially if you’re a nature lover. The largest living teak tree in the world is located in Kerala’s Parambikulam Wildlife Sanctuary. Falling within the district of Palghat, the tree has been named Kannimara and measure approximately about 47.5 m in height. It is situated about 80 km from the popular Nilambur teak tree forests.
These were just some of the many mind–blowing facts about Kerala. To know more, book some cheap flights with Indian Eagle[T1]  travel agency and visit the state for a vacation. Be assured that this will be your most special trip yet!
READ  5 Top Development Tools that Will Help You Do More in Less Time

Your Favorite Destination With American Airlines

A web developer’s life is often a rewarding one. But having your superior breathing down your neck might be not...